Apple Inc., which is known for its quality and high price points is facing competition in various domains. From the smartphone segment to earphones, Apple competitors are not only increasing their output but also matching the price point of the company. This article discusses Apple’s competition considering different market segments and its overall impact on the company.

Apple Inc. is considered to be one of the largest manufacturers of smartphones, tablets, and Bluetooth-operated earphones. The entity not only faces tough competition but due to its vast operations, the impact of competition is significantly high. According to the reports of Business Insider, Apple is reducing its ‘AirPods’ production by 25-30% in 2021 due to the increasing competition in the wireless Bluetooth earphones market. With high competition, the sales of this segment have decreased and the company is planning to manufacture about 75 to 85 million AirPods when compared to the previous forecast of 110 million. Thus, even with a dominant position, the impact of competition can be identified on the production plans of the company.

However, the report of Forbes suggests that the impact of competition from other smartphone manufacturers is limited to an extent. Apple competitors like Samsung, Google, and others do not match the dominant position of Apple when it comes to smartphones. The report states that due to the impact of COVID-19, demand for mid-range phones has increased which has forced companies to emphasize more on flexible price points to find growth. Apple with its iPhone SE already dominates the market as it has set the benchmark for lower prices with higher features. For example, the company announced that its A13 Bionic chip will be present in the mid-range iPhone SE which is also present in flagship smartphones such as iPhone 11 and iPhone 11 pro. Furthermore, to overcome the competition, the company announced that it will be providing the features of flagship smartphones through CPU, GPU, memory storage, and key features. One of the key Apple competitors for the company in this segment is the company OnePlus which is known for its low-priced quality smartphones. According to Forbes, this Shenzhen-based company is a flagship killer for its key aspects that are provided at cheaper rates when compared with other Android smartphones.

As per the data provided by Statista, since the initial launch of Apple’s iPhones, the company has recorded continuous increase in its market share till the year 2012. However, with the launch of new features of android and an increase in the number of Apple competitors, the market share of Apple faced some consolidation and faced its lowest value in 2019. However, newer CPU mechanisms and better price point models such as iPhone SE boosted the growth of market share for the company and can help the company to face other Apple competitors. 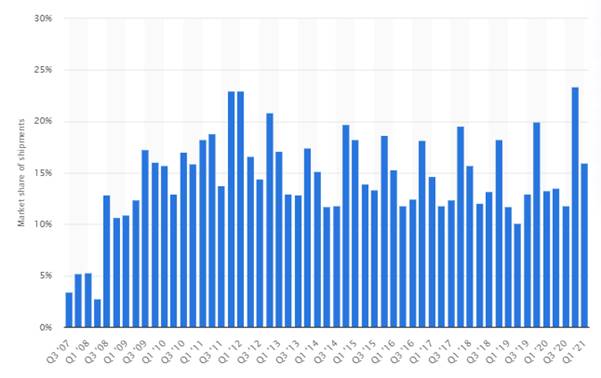 According to the report of Forbes, Apple Inc, made considerable changes to improve its competitive advantage in the MacBook segment. The company is focusing on closer integration of Mac hardware and software to provide a secured ecosystem for consumers and also creates a strong position against. Apple’s macOS or Mac-based Operating System is expected to provide enhanced operational effectiveness without a price increase. With this, the company is expected to have better performance than Microsoft’s Window OS which is a direct competitor in this space. In the latest announcement of series of MacBooks, the company announced that it will be using a stronger and faster processor, M1 to increase its effectiveness. Forbes reports that this system will set the benchmark in the market and the Apple competitors such as Intel, AMD, and Qualcomm are required to increase their innovation to match the market dynamics. In the latest announcement regarding MacBook, Apple mentioned that all the Mac machines will be running on M1 processors to collaborate the ecosystem and allow performance benefit across the range.

Forbes mentioned in their article the aspect of financial margins in the overall competition. As suggested in the article, Apple has always focused on maintaining a store's financial margin not only to support its operation but to also build a strong financial mechanism for future output. The article mentions that the company always focused on maintaining gross margins at 22% so that the company has an adequate advantage in the market for its future operations. Over the last 15 years, the average margins of the company were 37-38%. In the annual report of 2021, the company announced gross margins at 42.5% which were the highest in past 9 years according to Forbes.

With such strong financials, the company has built powerful stores and outlets and improved on its back-end architectural program which requires high operational and promotional costs, which aligns with Apple mission statement. This has assisted the company in planning its ecosystem and focusing on constant growth. Even though such high margins require increasing the costs of the products, it is important to note that Apple has always kept its product on the higher end of the price range. This has not impacted the market share of the product since it is known for its quality and effectiveness with the high price point. Thus, even though increased margins require increasing the price of products, the market share of the company faces no negative impact of the same.

A similar analysis is presented in the report of CNBC that mentions that since 2012, the company’s average revenue after cost of goods sold was 30% which has now increased to 42.5%. With such returns on operations, Apple is considered to be the most valuable company in the U.S. and it is earning higher profits from its iPhones and iPad segments every year. This reflects that even though there is competition present in the market, the strong Apple competitive advantage which allows continuous improvement in financial positions. Furthermore, in certain segments, the company faces relatively no competition such as Apple store and Apple Music as these platforms are attached with OS of MacBook and iPhone. In some of its segments like iTunes and Apple Pay, there is competition present, however; with the unique support and operating system of Apple, the company has distinct advantages which allow continuous growth for businesses. According to the report presented by CNBC, in the annual report of 2021, the service margin of the company increased from 65% to 70%. Also, a quarter-on-quarter growth of 27% was seen in these margins for the company. In the annual reports, the company also announced that it has 1.65 billion active users cumulatively on its service products that reflect the strong base of consumers for the entity.

These service and product portfolios of the company have increased considerably over the past decade assisting in faster growth in high margin segments. Also, the company is considered to have a strong grip on its supply chain to ensure that the operations are carried out with the expected level of performance. The report of CNBC specifies that with a strong supply chain and increasing performance in both the software and hardware domain, The company is having an edge over the Apple competitors. However, in the Apple Music category which is a rising software platform for the company, the company is facing tough competition from Spotify, which is strong Apple competitors. Spotify which is considered to be top Apple competitors in the music and audio segment has launched its podcast subscription service in 2021 to compete in the segment with Apple. Spotify announced that it isn’t taking any subscription revenue for the next two years to improve its content and will be charging only through transaction fees.

Thus, the overall analysis suggests that even though we have identified some Apple competitors, the company is doing well in some segments as there is strong financial growth. However, in certain segments, the company is facing tough challenges such as Apple music and smartphones.

Get Professional Writers to Help with your Papers

Looking for more papers like Apple competitors, but custom written just for you? You have come to the right place. At EduHelphub, we provide custom college essay writing service for college and university students across a wide range of subject domains. Our completely plagiarism free papers can help you get the grades that you always wanted.